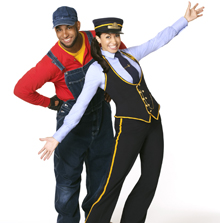 The fourth edition of the Penn/Bright Entertainment-produced series, which will air daily on the 24-hour Disney Junior programming block, follows the musical adventures of singer/train station manager Genevieve Goings and dancing/beatboxing engineer DC as they take kids to jungle, sea and magical locales while performing songs from classic Disney films including Under the Sea, Supercalifragalisticexpialidocious, Let’s Go Fly A Kite and When You Wish Upon a Star.

Here is a sneak peek of the Supercalifragalisticexpialidocious episode: