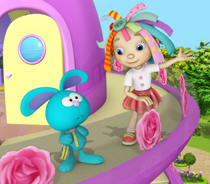 Preschool-focused DTT channel RAI YoYo started broadcasting the first season of Rosie in 2011, and the second series is set to air next year.

Spainish pubcaster RTVE, meanwhile, has acquired the third season of the preschool, girls-focused series. Rosie‘s first two seasons had a successful run on RTVE kids channel CLANTV, with audience share peaking at 64% of four- to six-year-olds.