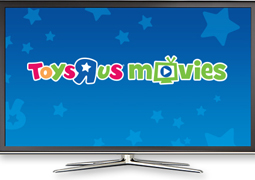 Toys ‘R’ Us gets into family-friendly video streaming

In a move to further extend its digital footprint and compete with online-only retailers such as Amazon.com, Toys 'R' Us has launched a new digital entertainment streaming service for parents and children.

In a move to further extend its digital footprint and compete with online-only retailers such as Amazon.com, Toys ‘R’ Us has launched a new digital entertainment streaming service for parents and children.

ToysrusMovies.com launches as a subscription-free service today, allowing users to stream content from the site on computers and devices enabled with Adobe Flash technology.

Plans are also set to expand the service in the coming months to web-enabled devices including Blu-ray players, televisions and tablets. In addition, a Toys ‘R’ Us Movies app will soon be available for its new tabeo wi-fi-enabled kids tablet, which hits Toys ‘R’ Us shelves across the US and online on October 21.

The new streaming service, powered by digital entertainment company Rovi Corporation, features more than 4,000 titles, customizable parental controls, and new movie releases the same day they hit retail shelves and TV series the day after they air. Movies start at US$2.99 apiece for a 24-hour rental and US$5.99 each for a licensed digital download or stream. Television episodes start at 99 cents, with the majority priced at US$1.99.

Users can also browse by age, character, and genre, and kids can use a wish list tool to add movies and TV shows they would like to view.

The news comes on the heels of Toys ‘R’ Us launching a Price Match Guarantee on all of its products through December 24.