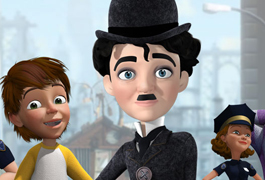 The dialogue-free Chaplin and Co. is comprised of short-form gags based on the Charlie Chaplin’s iconic film character.