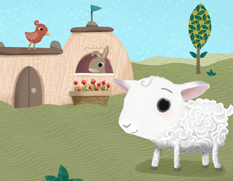 The 26 x three-minute series follows the adventures of a Littlest Lamb and his friends Rabbit and Bird who build a home that provides refuge for vulnerable animals.

The series, which will be made at Little Airplane’s New York studio and is based on a curriculum by Dr. Christine Ricci (Dora The Explorer), is set to launch at MIPCOM 2012.

The Littlest Lamb Organization is currently building an orphanage outside Cairo, Egypt.