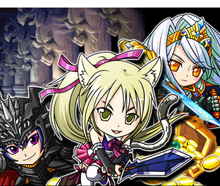 Toei Animation's new animated series Driland, based on GREE's hit social game of the same name, will make its debut at MIPCOM 2012.

Toei Animation’s new animated series Driland, based on GREE’s hit social game of the same name, will make its debut at MIPCOM 2012.

Following in the footsteps of digital-first properties like Rovio’s Angry Birds that are diving into the TV world, the 13+ x 20-minute Driland series will expand on the game’s storylines by following the continuing adventures of main characters Princess Davina, Milo the manservant, Horace the hunter and Ryan the rear guard.

According to GREE, Driland the game boasts more than 200 million users globally.