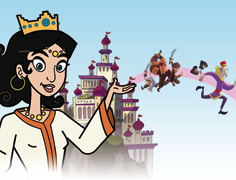 The 52 x 11-minute comedy adventure series, which is launching in more than 60 countries in 15 languages this year, features heroine Shahrzad and stories of the famed 1001 Arabian Nights (including Sinbad, Aladdin, and Ali Baba).

Big Bad Boo’s pre-production plans are already underway for season three, five comic books have been published in multiple languages, and novels, additional comics, mobile apps and games are in the works for the IP.