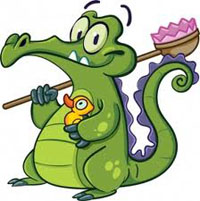 Where’s My Water web series to bow in October

The upcoming 12-episode web series based on Disney's app sensation Where's My Water is set to launch in October, and a sneak peek has been released marking Swampy's first birthday.

The upcoming 12-episode web series based on Disney’s app sensation Where’s My Water is set to launch in October, and a sneak peek has been released marking Swampy the alligator’s first birthday.

Disney Where’s My Water Presents: Swampy’s Underground Adventures, animated and written by Van Nuys, California-based Animax Entertainment, will be available next month on Disney.com and on Disney’s YouTube network. The exact day of the launch is yet-to-be announced.

Since launching one year ago, Where’s My Water, along with the new Where’s My Perry app based on Disney Channel’s hit series Phineas & Ferb, have been downloaded more than 100 million times across iOS and Android devices. Where’s My Water also spent 44 days at the number one spot on the US App Store.

The property has also moved swiftly into merchandising thanks to deals inked in May by Disney Mobile and Disney Consumer Products (DCP) with Hasbro, Jakks Pacific/CDI and Toys ‘R’ Us.

In addition, Swampy was introduced to guests this summer via special merchandise at Typhoon Lagoon at Walt Disney World Resort, and a new tie-in with the upcoming Tim Burton film Frankenweenie now provides 10 new levels of free gameplay to Where’s My Water inspired by the movie.