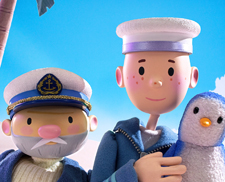 Calamity Island focuses on visual comedy and follows the misadventures of two shipwrecked sailors who are forced to share a tropical island with its inhabitants – namely a pesky penguin.

Puppet-makers Mackinnon & Saunders is the team behind a number of popular kids series including CBBC’s Frankenstein’s Cat and Cbeebies’ Raa Raa the Noisy Lion, as well as films such as Tim Burton’s Corpse Bride, Wes Anderson’s Fantastic Mr. Fox  and the upcoming Disney feature Frankenweenie.