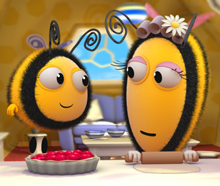 The Hive buzzes onto Disney Junior US

Boutique distributor Bejuba! Entertainment has secured a broadcasting deal with Disney Junior US to air preschool series The Hive from October 2012.

Boutique distributor Bejuba! Entertainment has secured a broadcasting deal with Disney Junior US to air preschool series The Hive from October 2012.

The 26 x half-hour series from Monumental Productions, Lupus Films and DQ Entertainment is now seen in more than 150 countries worldwide and has been a ratings success in the UK on Disney Junior and ITV, as well as internationally on Disney Junior, and in Australia on ABC.

The Walt Disney Company has now taken cable and satellite rights for the series in all territories except Australia and Israel.

Expansion across platforms is also moving forward thanks to a deal made last June by the IP’s licensing agent Space Enterprises that will bring the series to the LeapPad learning tablet and Leapster Explorer console.

In addition, Space and Avanquest are set to launch iOS mobile apps based on the brand and other licensees include Jupiter Toys (wooden toys and furniture), Mookie Toys (master toy), EMI Publishing, Moonpig, Blues Clothing and Aykroyds TDP.