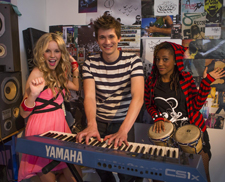 Independent producer Moi j'aime la télévision (MJTV) has inked a presale deal with France's Canal J, and a global distribution agreement with Lagardère Entertainment Rights, for its new teen series Which is Witch.

Independent producer Moi j’aime la télévision (MJTV) has inked a presale deal with France’s Canal J, and a global distribution agreement with Lagardère Entertainment Rights, for its new teen series Which is Witch.

The 26 x half-hour comedy/drama series targeting kids ages six to 14 follows the trials and tribulations of a high school boy whose two best friends happen to be a witch and a fairy.

A pilot is available, and the full series that starts production next month is expected to air from spring 2013.

Produced by MJTV and I Love Television, and co-produced by France’s Genao Productions and Belgium’s Be-Films, Which is Witch is filmed in English (2D and stereoscopic 3D) with a British cast and is the brainchild of the creative team behind the hit Nickelodeon show Genie in the House.

Lagardère Entertainment Rights (formerly Europe Images) will be shopping the series next month at MIPCOM.