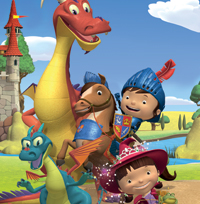 The Alexander Bar-created series, co-produced by Nelvana and HIT Entertainment, is set to air in Latin American regions in Spanish and Portuguese in the coming months.

Broadcasters currently airing the series include Nickelodeon and Nick Jr. (US), Treehouse (Canada), CBeebies (UK), ABC (Australia) and TF1 (France). Mike the Knight is also set to launch in more than 20 additional territories in the coming months.

Nelvana Enterprises represents the series in broadcast and home entertainment in Canada and France, as well as broadcast in the US and Latin America, while HIT Entertainment represents Mike the Knight in all other territories globally.

HIT is also finalizing plans with Fisher-Price to market and manufacture a global toy range for the IP (excluding the UK and Japan).