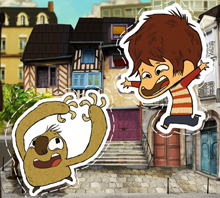 Moving to Scandinavia, Nickelodeon has acquired Santa Apprentice (52 x 13 minutes) for all territories including rights to Benelux, and DR TV Denmark has also grabbed the series.

In Brazil, season two of adventure comedy Gawayn (52 x 13 minutes) has been nabbed by Globosat.