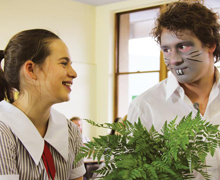 The Australian Children's Television Foundation (ACTF) has sold its kids sketch comedy series You're Skitting Me to ARD Bayerischer Rundfunk for broadcast on Germany's KiKa channel.

The Australian Children’s Television Foundation (ACTF) has sold its kids sketch comedy series You’re Skitting Me to ARD Bayerischer Rundfunk which will air the series on Germany’s free-to-air KiKa channel.

The series, produced by Jigsaw Entertainment for ABC3, targets kids ages 10 to 15 and features crazy characters, monologues, parodies and animations by an ensemble cast of Australian teens.

You’re Skitting Me is distributed internationally by the ACTF.