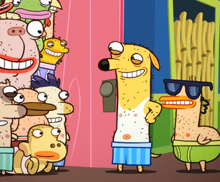 Moving online, Cabana Craze is a brand new AlmostNakedAninals.com game that allows users to play as popular characters Howie, Duck, Octo, Narwhal, Bunny and Piggy while running their own hotels. Players can also use codes to unlock secret games and exclusive videos.