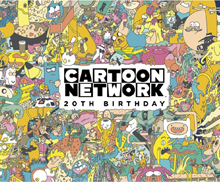 To honor the milestone, the 24-hour kidsnet will replace its regular October 1 programming schedule with birthday-themed episodes of classic series including The Looney Tunes, The Powerpuff Girls and Dexter’s Laboratory, as well as new series such as Adventure Time, Regular Show and The Amazing World of Gumball.

The all-day event will also feature the global television premiere at 6:58 p.m. (ET/PT) of an original music video celebrating Cartoon Network’s 20 years of creativity. The video’s animation, which includes more than 100 popular Cartoon Network characters, was created by London-based ILOVEDUST. Following its broadcast debut, the video will be available as a free download at iTunes, Xbox and Amazon.com and can be viewed at CartoonNetwork.com and on Cartoon Network’s YouTube channel.

Additional birthday highlights include a month-long online opportunity for fans to vote for their favorite Cartoon Network characters and shows in categories such as Best Villain, Best Gadget and Best Cartoon Place to Live.

Every weekend in October, Cartoon Network will present select shorts and series episodes spotlighting the top six finalists among creatively-themed categories. The birthday bash will conclude on November 3 and 4 with a special winners weekend announcing the fan favorites.