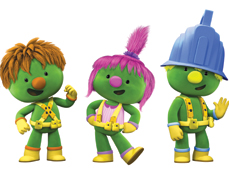 Coinciding with 30th anniversary of Fraggle Rock in 2013, The Jim Henson Company has created a new 52 x 11-minute spin-off series that puts the the classic’s diminutive laborers into the spotlight. And Turner EMEA, for one, likes the new direction. The broadcaster has snapped up  Doozers for its expanding pan-Euro preschool channel Cartoonito’s fall 2013 schedule.

Co-produced with Canada’s DHX Media, the new series stars Spike, Mollybolt, Flex and Daisy Wheel. The four kid Doozers live in Doozer Creek, a self-sustainable community (located just beyond the view of humans). The action really takes place in a high-tech, eco-friendly enchanted forest, where the Doozer pals share a passion for inventing.

“We call the Doozers playful inventors,” says Richard Goldsmith, EVP of global distribution at TJHC. “It’s about exploration and working together with others, and to do so  they borrow things from nature to make their world and the larger world around them better.”

“There was a combination of appeal for us in that it is a well-known brand, and it’s something we didn’t have on the channel in the sense that it’s a make-and-do series with an engineering aspect,” adds Cecilia Persson, VP of acquisitions and co-productions for EMEA at Turner Broadcasting.

Goldsmith says there is a possibility that Turner will pick up the series for other territories. “But there is so much interest globally that it is really going to be a focus of ours at MIPCOM this year to close deals,” he adds. He’s also open to licenses in some terrritories where the property might start on an SVOD platform before it goes to DVD.

The company also plans to carry the series’ inventing and building philosophy into interactive digital content and consumer products, though its currently keeping mum on specifics. TJHC is now in talks with licensees for products across categories. “The stories are about making things, so it allows us to do more with ancillary businesses such as CP and interactive,” says Goldsmith.

“Everything that is being done in 2013 to celebrate the 30th anniversary of Fraggle Rock will help lead up to the premiere of Doozers,” he says. The anniversary year will see classic Fraggle Rock episodes rolling out across international territories on various platforms, as well as special DVD releases.