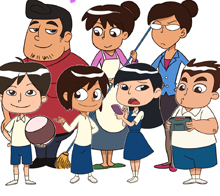 The series, which highlights aspects of Malaysian culture and features English and Bahasa Malaysia audio, encourages imaginative play in kids and follows the adventures of a seven year-old girl who loves to play-pretend.

The new series follows the February Nick debut of another original Malaysian production Cingkus Blues, about a cat and a rat who are best friends.