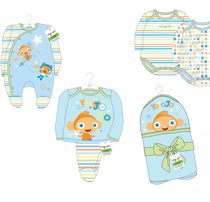 The new range of Waybuloo-themed baby essentials for boys and girls was developed for George by licensee Paul Dennicci and will hit Asda retail stores and online at George.com in January 2013.

Waybuloo, produced by The Foundation, part of Zodiak Kids and Decode Entertainment for the BBC, made its CBeebies debut in May 2009. To date, the BBC has commissioned a total number of 150 episodes and the series has seen consistently high ratings in the CBeebies bedtime hour slot.

Zodiak Rights holds worldwide rights in all media for the Waybuloo brand, with the exception of Canada where Decode Enterprises handles broadcast and home entertainment, and DHX Licensing represents consumer products.