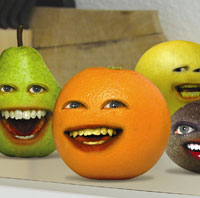 The Collective has sliced two new licensing deals for posters and calendars for its internet sensation Annoying Orange, which is now the subject of a successful series airing on Cartoon Network US.

The Collective has sliced two new licensing deals for posters and calendars for its internet sensation Annoying Orange, which is now the subject of a successful series airing on Cartoon Network US.

Calendar Holdings has signed on for a line of calendars beginning with a 2013 edition launching this fall at Go! Calendars US mall locations and other specialty and independent retailers as well as on the web site, Calendarclub.com.

Annoying Orange posters (flocked and black light) by Scorpio Posters will be available at Toys ‘R’ Us, Spencers, HotTopic.com and at assorted specialty, online and independent retailers across the US for the 2012 back-to-school period.

Since debuting on YouTube in October 2009, the YouTube short-format series has garnered more than one billion total views with over 2.4 million YouTube channel subscribers. It’s also found success as a new long-form TV series, and since premiering on Cartoon Network US on June 11, it has consistently ranked in the top spot in its time period among boys ages two to 11 and six to 11 versus all TV. Talks are currently ongoing about bringing the series to UK airwaves.

The brand’s growing licensing program includes talking plush, clip-ons, and collectible figures from The Bridge Direct, apparel and accessories for young men, juniors, boys and girls from Hybrid Apparel, LF USA and Accessory Innovations, costumes from Rubies Costume Company will debut this fall, and graphic novels from Papercutz and electronic accessories from Sakar will arrive in time for the December holidays.