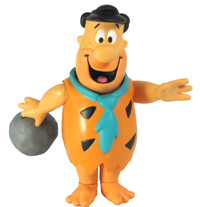 Set to hit toy aisles across the US from this August into the fall, the products are based on eight Hanna-Barbera IPs, including The Flintstones, The Jetsons, Tom & Jerry, Yogi Bear, Space Ghost, Secret Squirrel, Captain Caveman and Hong Kong Phooey.

The plush line features a 12-inch pull-string plush with sound and plush deluxe sets, while the line of figures includes two-inch collector’s sets and six-inch figures.

Fifty years since animated series from Hanna-Barbera Productions first aired, many continue to air in worldwide syndication. During its existence, Hanna-Barbera developed more than 70 popular animated movies and television series for families.