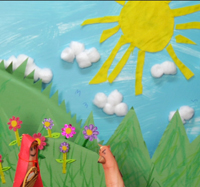 DJ Tales features costumed finger puppets performing kids’ versions of classic fairytales and a sneak peek of one of the series’ 10 short-form episodes entitled Three Pigs can be viewed below or here.

Additional episodes will air daily in rotating slots during the nightly programming block which launches September 4 airing from 9:00 p.m. to 4:00 a.m., ET/PT.

Disney Interactive Family is producing the interstitial content and Babble, Disney’s parenting blog platform, is sponsoring the block. The new programming will also be featured online on Babble’s YouTube channel and at DisneyJunior.com/Nightlight.

Shorts in development include a series starring child and family photographer Me Ra Koh, a series focusing on stay-at-home dads, and vignettes featuring parents sharing the story of the first day they brought their child home.