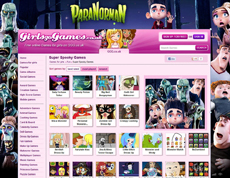 The spooky yet comedic film, from Portland, Oregon-based animation studio Laika (Coraline), is set to premiere in the UK on September 14.

Spil’s online campaign, which was brokered by TED@MediaCom and is live in the UK from August 27, features zombie games, additional game hubs, avatars, and new game categories across all three of Spil’s UK properties – GirlsgoGames.co.uk, Agame.com, and Games.co.uk.

Spanning 22 markets in Europe, Latin America, and the Asia-Pacific region, the campaign first launched on July 17 in Mexico, followed by France, Germany, and the UK. The promotion ends in January 2013 in Australia and New Zealand.

Spil Games currently has more than 180 million monthly active users, and after its first two weekends of North American release, ParaNorman has racked up US$28.3 million in box office sales.