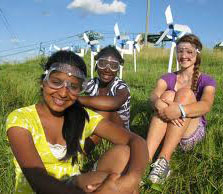 PBS affiliates across the US are set to premiere the first of 10 new half-hour episodes of STEM-based, cross-platform, live-action series SciGirls this October.

PBS affiliates across the US are set to premiere the first of 10 new half-hour episodes of STEM-based, cross-platform, live-action series SciGirls this October.

The series, which targets girls ages nine to 13, taps into the online sensibilities of today’s kids by linking interactive content to its Big Bad Tomato Interactive-developed website including online games, STEM videos and activities.

Cross-platform games for season two include Pick ‘m Stick ‘m (an online game that starts when kids find clues during the TV show), Aquabot (where players can engineer an underwater remote operated vehicle and help Izzie and Jake find lost treasure), and Busy as a Bee, a Farmville-like social networking game where users can grow gardens and protect bee hives.