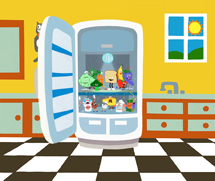 Peekaboo Fridge, which will be available August 30 exclusively for iOS devices and in early fall 2012 for Android, is the company’s first Peekaboo release in nearly two years and allows kids to explore and learn about a variety of fruits, vegetables and healthy whole foods when they open the fridge door.

The app also features looped and storybook modes, and a dance party feature where kids can get up and dance along with the fridge characters.

Also on August 30, Peekaboo Friends will launch for free and offers previews of each Peekaboo app that is currently available on the App Store, Amazon, Nook, and Google Play and any upcoming Peekaboo releases.

The current lineup of Peekaboo apps, Barn, Wild, and Forest, have now been downloaded more than one million times with Peekaboo Barn being played over 40 million times worldwide. It was also recently named one of the top 50 best kidsʼ apps for 2012 by Babble.com.