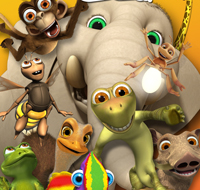 The five-minute shorts, which have aired in more than 170 countries worldwide, screened in theaters in the pre-show family segment and on numerous international airlines, are dialogue-free and follow the comedic adventures of different animals including a giraffe and a firefly.

The shorts have also recently found success on BBC Kids Channel and in select Cineplex Entertainment theaters across Canada.

The third season of the series is currently in production.