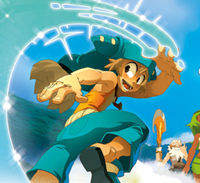 Season two of the 52 x 22-minute series, which originally evolved from an Ankama-developed MMORPG Wakfu which takes place 12 years before the series, is expected to air from October 23, 2012.

France 3 originally debuted the series and Cartoon Network recently picked up season one for broadcast in Italy this summer and France from January 2013, with season two slated for 2014.