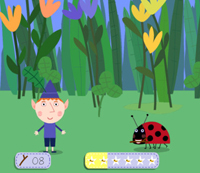 The P2 Games-developed app, which is available now on the Apple App Store, is based on the series from Astley Baker Davies, the creators of Peppa Pig.

App features include playable characters including Princess Holly, Ben Elf and Gaston the Ladybird, and four games and sticker books.

The release further adds to the growth of the property which now spans TV, live theater, apparel, toys and furniture.