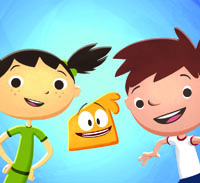 A sneak peak of the series can be viewed on September 8 at 9:50 a.m. ET and following the series premiere, Justin Time will air regularly on weekend mornings at 8:30 a.m. ET.

As the series increases its presence with broadcasters (season two is set for a fall 2012 delivery), the property is also branching out into online and mobile games as well as books.