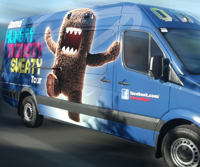 New York's Big Tent Entertainment has announced that its viral phenomenon Domo is hitting the road this summer on his first-ever US summer tour.

New York’s Big Tent Entertainment has announced that its viral phenomenon Domo is hitting the road this summer on his first-ever US summer tour.

The 18-city Hungry Thirsty Sweaty tour runs from July 30 to August 20 across three states beginning in Vancouver, Washington and wrapping up in L.A.

The furry pop culture character will make appearances at Spencer’s retail stores, at music festivals (Vans Warped Tour, Outside Lands Festival, Sunset Strip Festival), and acclaimed street artists Swank One and Teknyc are even creating Domo-inspired murals which will be displayed in L.A. and San Francisco.

As the mascot for Japanese public broadcaster NHK, Domo has since spawned thousands of fansites, YouTube videos, a Facebook game and an array of consumer products.