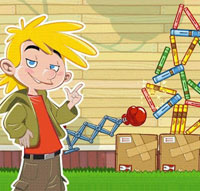 It's the dog days of summer, all right, and between the pushing 100 temperatures and the freak hail storms (not to mention some plane travel), we at No Crusts HQ have been playing some indoor games of the interactive variety. Here's one of our every-so-often peeks at what games we're playing now, and what we're thinking about them.

It’s the dog days of summer, all right, and between the pushing 100 temperatures and the freak hail storms (not to mention some plane travel), we at No Crusts HQ have been playing some indoor games of the interactive variety. Here’s one of our every-so-often peeks at what games we’re playing now, and what we’re thinking about them.

This week, we’re happy to welcome a guest blogger to our fold, No Crusts’ Usability Manager, Natalie Golub. Natalie is the voice of the user in our design process, so we’re excited to share her thoughts with you as well. 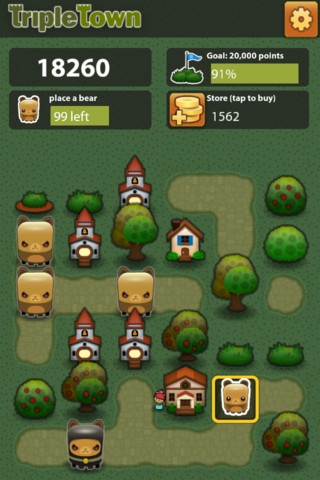 I don’t mean to always write about indie games, but I must have some subconscious drive to do so, because here’s another one. This game was recommended to me by a colleague and I’ve been playing it for a couple of days semi-obsessively. It’s a fairly simple game where you are trying to populate the screen of your device – in my case, an iPhone – with a settlement of plants and buildings. Plant three objects next to each other and they merge into another object, the next item up in terms of points value. Three plots of grass become a bush, three bushes become a tree, three trees become a cottage, three cottages become a larger house, etc. The challenge is in placing your objects properly and thinking ahead enough to place them where you’ll be able to merge them with other objects later in the game. There are also bears that appear periodically and can block your path or merge into churches (more on that in a minute).

I have to say that my feelings about TripleTown are somewhat mixed.

The pros: The gameplay is simple and rewards continued play in a tangible and immediate fashion. It’s fairly easy to a get a hang of the different game objects, how they behave, and how to best place things to create larger items and get higher scores. But the logistics of actually doing that remain challenging enough that even once you’ve been playing for a while the game is still engaging.

The cons: There are a few slightly wonky elements in the game, including an in-app purchase economy that is annoyingly easy to access accidentally and a less-than complete tutorial that leaves out some key information, but these are fairly minor quibbles. My larger gripe is with the narrative framework of the game. Although I talk a lot about storytelling on this blog, I actually often enjoy games that are totally or nearly narrative-free (I’ve spent plenty of time playing Drop7 and SpellTower, games that are completely devoid of story). My issue is that this game makes no narrative sense to me. What’s the deal with the bears? Where do they come from? Why do they turn into gravestones and why do the gravestones turn into churches? How are they related to the crazy ninja teleporting bears that appear at random in higher levels of the game? I could be missing something, but as a casual player it all feels fairly random and like the obstacles the game is throwing at me are just transparently that – obstacles that the game is throwing at me.

I certainly don’t believe that all games need huge backstories, but I feel like the ones that have minimal narrative are best served by being simple and true to themselves. Games like Angry Birds or Doodle Jump or Cut the Rope don’t spend a huge amount of time explaining their stories, but their creators seem to have worked hard to make their constructs coherent and consistent in a way that TripleTown isn’t always.

That said, I played TripleTown for two hours last night. So what do I know?

As a longtime Reading Rainbow enthusiast, I have been eagerly awaiting RRKidz’ relaunch of this classic educational show into an iPad app. Besides having a soft spot for LeVar Burton, as well as the show’s theme song (“Take a look, it’s in a book…”), I was particularly pleased to see the brand return in the form of an interactive experience. Being able to interact with a story, on an individual, dynamic platform seems only natural for the series. As opposed to passively engaging in a static portrayal of a book, as children did fondly for 24 years, children now have a chance to have an individual, interactive and technologically relevant experience… at least, those are my hopes. Now that I’ve disclosed my bias, let’s play.

It’s beautiful. The art is pretty, and the imaginary concept is smoothly executed. Children can scroll through a make-believe world of floating islands (e.g. Animal Kingdom, Action Adventures and Magic Tales). Each welcoming island invites the player to tap on it, thereby selecting a category of books from which to choose. It is a creative and playful presentation of a main menu.

It’s customizable. Before entering the floating Reading Rainbow world for the first time, the player is asked to submit her age and sex, and select three favorite interests from a list of choices (e.g. princesses). This information informs which islands will exist in the child’s personal floating world.

The usability could be better. Reading Rainbow’s origins in television are apparent when it comes to their expectations of child interaction with a touch screen device. Long, uninterruptible videos, which are customary for TV, will likely lead children to impatience. Inactive buttons that look active will also lead to frustration, as well as uninterruptible tutorials and pagination controls that work inconsistently. Add some unexpected crashes to the list, and let’s just say, the usability has room for improvement in the next update.

It’s expensive. The app is, well, free, but that includes just one book. To acquire access to all of the offered books, the cost is $9.99/month or $29.99 for six months. That’s a lot to pay up front. What’s more, there is a lack of protection surrounding in-app purchases, so if the tapping’s right, little Henry might sign you up for a monthly bill without you (or he) even realizing it.

The mission is clear (and a great mission it is). Reading Rainbow’s passion for motivating reading, and engaging children in meaningful reading experiences is evident. The core of the show is embedded in the app, indeed. If you are up for the cost, as well as prepared to brave the existing usability challenges, then the Reading Rainbow app can be a fun and meaningful experience for your child. 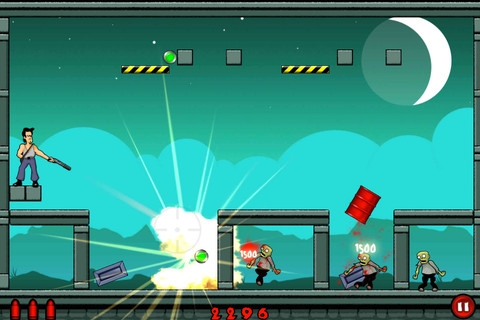 I’ve been at Casual Connect Seattle all week. So I’ve amassed a list of things to play. Rather than pick one, I’ll just tell you the whole list!

Kowa-Ota (iOS)A Japanese “Sound Novel” that’s in the horror genre. Normally I wouldn’t touch this, but I’m really curious about the sound design. And the one I wanted to play, Kamaitachi no Yoru, is not yet available for eBooks (but is apparently coming soon).

Stupid Zombies (iOS & Android)It was described to me as great for zoning out.

Occupied (iOS)A puzzler in which you have to get people to the bathroom.

SongPop (iOS)Kind of like Draw Something meets Name that Tune.

Apparently the flight home is going to be about my own entertainment, not necessarily research on the kids space…

So that’s a cross-section of what games are currently on the team at NoCrusts’ mobile devices this week. We hope some of them will help you pass a few idle hours as the long, hot days of summer continue.

As always you can email us at kidsGotGame@noCrusts.com or catch us on Twitter at @noCrusts.