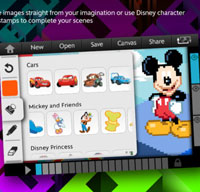 Developed by the creators of  creativity site Create on Disney.com, where users have produced more than 16 million pieces of original artwork since it launched in August 2009, Disney Pixel’d features a frame-by-frame animation tool, shaping tools, iCloud sync, Disney character stamps, and a Buddy Draw feature which lets multiple friends connect via Bluetooth or Wi-Fi to draw together in real-time.

A YouTube video of the Disney Pixel’d experience can be viewed here.