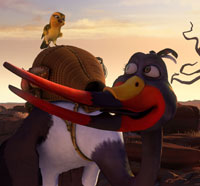 Sony will release the film in the US, Canada, the UK, and Australia and change its title to Adventures in Zambezia.

The film, which is the first theatrical release for Triggerfish, has currently been sold in more than 40 territories worldwide by Edward Noeltner of Cinema Management Group.

Featuring an all star voice-cast including Abigail Breslin, Jeff Goldblum, Leonard Nemoy, Richard E. Grant, and Samuel L. Jackson, the story follows the adventures of a young falcon named Kai who leaves his home and father on a journey to live in the bird city of Zambezia.

The film screened last month at the Annecy Animation Festival, and will make its South African debut at the Durban International Film Festival this week. It is already been released in Israel and is set to premiere in Germany and Russia at the end of August.