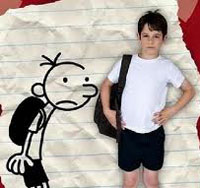 New UK licensees for Fox’s Diary of a Wimpy Kid

In the lead-up to the August 3 premiere of the newest film in the franchise, Diary of a Wimpy Kid: Dog Days, and the November launch of book seven, Diary of a Wimpy Kid: The Third Wheel, Fox has signed on UK partners BM Fashion for kids t-shirts and sweatshirts, Danilo for greeting cards, and Robert Frederick for stationery products.

More than 75 million books in the franchise are currently in print in 36 territories, translated in 35 languages worldwide. The book series was also recently voted as the best children’s book series of the last decade, beating Harry Potter, in a Blue Peter Poll of UK kids.