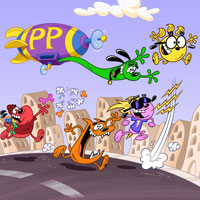 Interactive storybooks (iReaders) for The Green Weenie: Pooch Patrol and Tickle Monsters will be released and Ruckus has secured exclusive worldwide rights in all languages for all mobile devices.

The Green Weenie: Pooch Patrol, set to launch on iOS, NOOK and other mobile devices later this year, follows an adventure-seeking wiener dog and his canine companions. Tickle Monsters, which tells the story of two brothers and the ticklish creatures living under their bed, will follow.

Both iReaders will feature game-based storytelling.