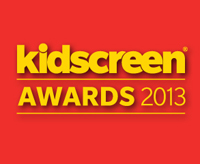 Following the success of the third-annual Kidscreen Awards this past March, the industry's global awards for excellence in children's TV has officially opened up its 2013 call for entries with new early bird entry fees in effect.

Following the success of the third-annual Kidscreen Awards this past March, the industry’s global awards for excellence in children’s TV has officially opened up its 2013 call for entries with new early bird entry fees in effect.

Entries are now being accepted for shows that target preschoolers (ages zero to five), kids (six to 10), tweens/teens (11 to 17) and families in the following programming categories: Best Animated Series, Best Non-Animated or Mixed Series, Best One-off, Special or TV Movie and Best Companion Website. The entry deadline for programming categories is September 14, 2012.

And for the third year in a row, a dedicated set of awards for best efforts in kids broadcasting from around the world will be included.

Kidscreen Awards 2013 winners in all categories will be announced at an evening presentation as part of next year’s Kidscreen Summit set to take place in New York between February 5 and 8.

Additional information on eligibility, judging and how to enter can be found at awards.kidscreen.com.