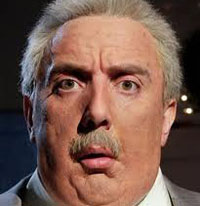 The new series will poke fun at people’s love and /or hate of sports, fitness and body perception and feature a mix of physical comedy, traditional sketches, silent comedy, clowning, juggling and acrobatics.

Popular British actor/comedian James Serafinowicz (from BBC Two’s The Peter Serofinowicz Show), is on-board to appear in one sketch per episode as his popular overweight businessman character Brian Butterfield (pictured).

Caroline Norris (Dead Boss, Armstrong And Miller) and Giles Pilbrow (Have I Got News For You, Spitting Image) have been tapped as series producers.