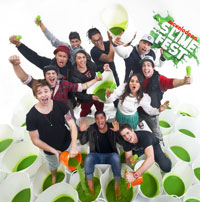 The festival, which will incorporate popular elements from the Kids’ Choice Awards, including music, stars, stunts, and slime, will feature appearance by artists such as Jessica Mauboy (The Sapphires), Reece Mastin (The X Factor), Justice Crew (Australia’s Got Talent, One Direction tour), singer-songwriter Stan Walker and Johnny Ruffo (The X Factor, NKOTBSB tour).