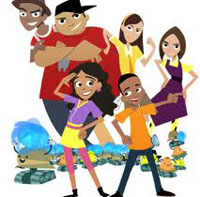 The new math-themed episodes appear at the end of each full Electric Company TV episode that airs on PBS Kids and online at the Prankster Planet area of The Electric Company‘s website from July 9.

Prankster Planet season two once again features Electric Company members Jessica and Marcus who appear as comic book heroes. The episodes follow the duo as they try to stop prankster Francine and her chaos-inducing Reverse-a-ball machine while teaching kids how to perform simple math equations and use math skills such as data collection and graphing.

Each animated episode ends in a cliffhanger that offers a direct hand-off from story to online game. When a player completes every online mission, he or she becomes an official member of The Electric Company. Additional features of the website include mini-games, avatar creation, a rewards system and a progress tracker for parents and teachers to monitor kids’ learning status.

The Sesame Workshop-produced segments are funded by a US Department of Education Ready To Learn grant and the Corporation for Public Broadcasting (CPB).

The new season follows the success of season one, which helped increase unique viewership on the Prankster Planet website by 432% with nearly 900,000 unique visitors and 3.2 million total visits being made last year.

A magazine distributed to PBS and other Electric Company partners called The Lost Guide to Prankster Planet is also part of the initiative.