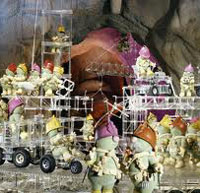 DHX partners with The Jim Henson Company for The Doozers

The project has been in the works since 2009, when The Jim Henson Company first partnered with Toronto’s Decode Entertainment, a subsidiary of DHX Media, on a 3D animated preschool series featuring the Doozers.

The Jim Henson Company is talking to broadcasters worldwide to license The Doozers, which will be presented at MIPJunior and MIPCOM this October.