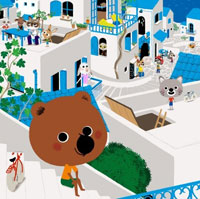 Atlantyca to rep Mouk in Italy

In a new deal with Paris-based prodco Millimages, Milan, Italy-based Atlantyca Entertainment has been named the exclusive licensing agent in Italy for the animated 2D preschool series Mouk.

In a new deal with Paris-based prodco Millimages, Milan, Italy-based Atlantyca Entertainment has been named the exclusive licensing agent in Italy for the animated 2D preschool series Mouk.

The deal will see Atlantyca manage the brand’s L&M program throughout the region and look for opportunities in product categories such as stationery, home wears, gift, novelties, games, and apparel.

Mouk (62 x 11 minute and 30 x one minute), which is based on the work of artist Marc Boutavant, is directed by François Narboux and commissioned by France Télévisions and Disney Channel UK.

The series follows the adventures of Mouk and his friend Chavapa as they explore the world on their bicycles and send travel updates to their home-loving friend Popo and his sister Mita.

ABC Australia picked up the series in March this year and additional broadcasters already on board include KiKA in Germany and Disney for its networks in France, Italy, Spain, Portugal, Benelux, Scandinavia, Eastern Europe, the Middle East and Africa.