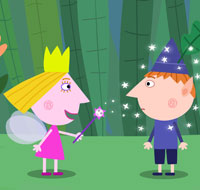 eOne Family's hit preschool brand Ben and Holly's Little Kingdom will be adapted into a live musical theater experience for the UK by prodcos Fiery Angel and Limelight Productions.

eOne Family’s hit preschool brand Ben and Holly’s Little Kingdom will be adapted into a live musical theater experience for the UK by prodcos Fiery Angel and Limelight Productions.

The prodcos, which have already staged two successful theater productions of Peppa Pig, will launch Ben and Holly’s Little Kingdom UK tour at The Orchard Theatre in Dartford on October 26. The rest of the UK tour will continue through summer 2013.

Richard Lewis is on board to adapt the show for the stage.

The latest initiative further adds to the brand’s growth, which has moved beyond its success as a TV series into licensed merchandise including apparel, toys and furniture.