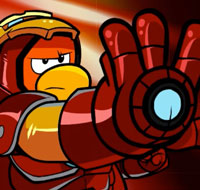 For the first time ever Disney's Club Penguin is bringing an outside franchise into its virtual world for its online event Marvel Super Hero Takeover.

For the first time ever Disney’s Club Penguin is bringing an outside franchise into its virtual world for its online event Marvel Super Hero Takeover.

Running from June 14 to July 3, the event centers around a virtual meteor that has hit the island and powered up the dangerous Destructobot. Players will choose to suit up as one of 14 Marvel super heroes or super villains, including Avengers characters such as Iron Man, Captain America, Hulk, Thor or mischievous super villain Loki.

As part of The Marvel Super Hero Takeover event, players will also be able to explore the island, which has been transformed into new destinations such a bank, jail and superhero HQ and meet Aunt Arctic, the new reporter and editor-in-chief for the Penguin Times, the Club Penguin island newspaper.