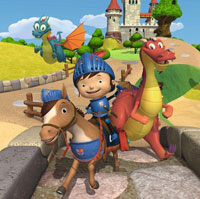 Fisher-Price Mike the Knight toys to roll out in 2013

The toy line will be based on the CG-animated series Mike the Knight co-produced by HIT Entertainment and Toronto, Canada-based Nelvana.

Mike the Knight currently airs on major broadcast platforms in the US (Nickelodeon and Nick Jr.), Canada (Treehouse), UK (Cbeebies), Australia (ABC) and France (TF1), and is slated to launch in more than 20 additional territories in the coming months.

Fisher-Price, Mattel’s largest brand, plans to develop, manufacture and market a variety of toys and role play items for boys and girls ages two and up across several categories including role play, playsets, plush, figures and preschool toys. Fisher-Price and HIT plan to debut the Mike the Knight line at retailers around the world (excluding the UK and Japan) starting in fall 2013.

Nelvana Enterprises represents the series in broadcast and home entertainment in Canada and France as well as broadcast in the US and Latin America, while HIT Entertainment represents Mike the Knight in all other territories globally.