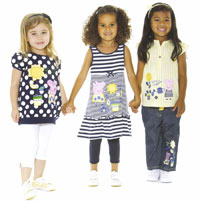 eOne Family has inked two deals with Blues Clothing for its preschool properties Ben and Holly's Little Kingdom and Peppa Pig and has sold Peppa Pig to Disney Junior in Spain and Italy.

eOne Family has inked two deals with Blues Clothing for its preschool properties Ben and Holly’s Little Kingdom and Peppa Pig and has sold Peppa Pig to Disney Junior in Spain and Italy.

The licensed clothing firm has just been appointed apparel licensee for Ben and Holly’s Little Kingdom and has renewed its license on Peppa Pig for a further three years in the UK.

Under the terms of the agreement, which runs from January 2013 until 2014, Blues will produce a collection of Ben and Holly’s Little Kingdom leisurewear exclusively for the UK market, which will include casual clothing, knitwear, outerwear and swimwear to be distributed throughout its network of department stores and mass market retailers.

The deal extension for Peppa Pig, which runs until the end of 2014, will see the clothing firm continue to develop designs that ensure the brand’s apparel line evolves with future fashion trends.

Furthering Peppa Pig’s global reach, eOne has just partnered with Disney Junior to broadcast the show on its TV channels in Italy and Spain this year. The series already has a following among children in Spain and Italy where it is broadcast on free to air channels RTVE and RAI.

Plans are underway to launch Peppa Pig merchandise in Spain at the end of this year with 15 licensing partners on board including Bandai as well as apparel and publishing partners. In Italy, eOne is lining up a roster of licensees including Universal as the brand’s DVD partner and Giunti Editores for publishing.