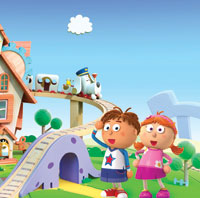 Channel 5′s milkshake! in the UK has picked up the rights to the series which will launch in Autumn 2012 in their morning preschool block. Zodiak Kids has also secured deals with several other broadcasters internationally including France 5 (France), Disney Junior (Canada), TG4 (Gaelic-language terrestrial channel in Ireland) and Pop TV (Slovenia).

Tickety Toc is a colorful CGI-animated series which follows the fast-paced, comedic adventures of twins, Tommy and Tallulah Tockety and their friends as they race against time to keep the clock ticking. The series explores concepts of teamwork, social responsibility and problem solving.

The series is created and directed by FunnyFlux Entertainment founder and president, Gil Hoon Jung. Executive producers are Nigel Pickard and Vanessa Hill for The Foundation and the series producer is Karina Stanford-Smith.

Tickety Toc was an enhanced acquisition deal with Nickelodeon channels around the world. Zodiak Kids has previously announced early presales of the series to NRK Super in Norway and to YLE Finland.