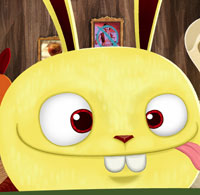 Teletoon has given a full-season order of 26 half-hours to Dr. Dimensionpants, from Cookie Jar Entertainment.

The cartoon about a 10-year-old boy who dons a pair of cosmic power pants is set to air on Teletoon in winter 2014.

Teletoon also ordered 13 half-hours of Endangered Species, a cartoon about a cranky squirrel, an optimistic bunny and a neurotic seagull from Nerd Corps Entertainment.

The broadcast also announced fresh season orders for Johnny Test, Detentionaire and Fugget About It.

Johnny Test, from Cookie Jar Entertainment, is due for a sixth season, or 13 half-hours, while Nelvana’s Detentionaire will see its third season of 13 half-hours air on Teletoon.

And Fugget About It, from 9 Story Entertainment, will air another 13 half-hours as part of its second season on Teletoon.