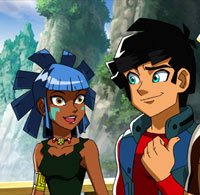 Redakai racks up additional sales across the globe

Zodiak Kids’ Redakai: Conquer the Kairu has been sold to three more broadcasters, including Kabel 1 in Germany, VT4 in Flemish speaking Belgium and Club RTL in French speaking Belgium, bringing the boys 52 x 26-minute action series to over 70 markets worldwide.

In the UK, the show debuted on Cartoon Network in February 2012, where viewership amongst boys increased by 24% after the first month. Cartoon Network is also the broadcaster in the US, Latin America and EMEA (excluding France and Spain).

Redakai was subsequently launched on CITV (UK) in April where it sponsors their weekday mornings. The CITV sponsorship has been designed to help further raise awareness of Redakai and support the Redakai trading card game which launched in specialty toy shops over Easter.

In Portugal Redakai is the number-two show on Panda Biggs, and on Canada’s YTV the show’s viewership increased by 200% in March among boys 6 to-11 versus the prior month.

In France the series debuted on Canal J in October 2011 followed by daily broadcasting on Gulli in February 2012, where it is now their number-two show. Redakai started on Gulli five share points ahead of the slot average among 4- to 10-year-olds, increasing its standing in every demographic by the second month of broadcast. The trading card game launched in April in specialty shops throughout France.

Zodiak Kids holds Redakai’s global TV and licensing rights excluding North America, which are held by Spin Master, along with all toy rights. In addition to TV rights in the US, Latin America and EMEA (excl. France and Spain), Turner CN Enterprises is the exclusive licensing agent for EMEA (excluding France) while Cartoon Network Enterprises is the agent in the US and Latin America.