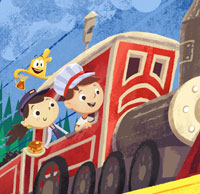 The first book in the series, Justin Time, The Pancake Express, is scheduled to be released September 1 this year and is based on an episode from the animated TV series which debuted in the US on Sprout in April 2012.

Justin Time‘s creator, Brandon James Scott, handled adaption and illustration duties for the first book which follows the adventures of Justin and his pal Squidgy as they set off on a cross-Canada trek aboard a steam train to help their friend Olive deliver maple syrup to Flap Jack Falls in time for a pancake festival.

The series has also expanded into online and mobile games thanks to partnership Guru made in September 2011 with Canada’s zinc Roe Design.