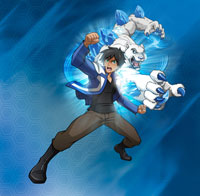 The deals will see Monsuno air on free-to-air channels including CITV in the UK, Switchover Media (K2) in Italy, RTVE (Clan) in Spain, YTV in Canada, Spacetoon in the Middle East, and Nine Network’s GO! channel in Australia.

Targeting six- to 11-year-old boys, Monsuno is a 52 x half hour animated action-adventure series in which a race to harness the power of Monsuno ensues between a group of heroic kids and the evil forces focused on destroying the planet. Nickelodeon has the pay TV rights to Monsuno, which premiered in the US on Nicktoons in February and is now rolling out in more than 60 markets worldwide.

FME is the worldwide (excluding Asia) distribution and ancillary rights agent for Monsuno and will be available this week at Licensing Show to discuss opportunities for phase two categories including apparel, graphic novels, sticker and activity books, as well as for phase three products in categories across games, outdoor toys, dress up, activity and craft, board games and puzzles.

Jakks Pacific is the creator of the underlying Monsuno property and master toymaker for the Monsuno toy line. The Topps Company produces Monsuno trading card games, confectioneries and related products.